There are substantially more and better paying jobs in STEM fields than in non-STEM fields, but only about a fourth of high school freshmen express any interest in STEM fields, and half of those change their minds by the time they graduate.  What kids do have an interest in, though, is video games: 97% of teenagers in the U.S. play them.

So, this is a great fit — a video game that’s fun to play, and, by the way, also happens to have you doing real engineering and problem-solving in a high-tech area.  Read the paper for more!

And then please, go support our KickStarter campaign! 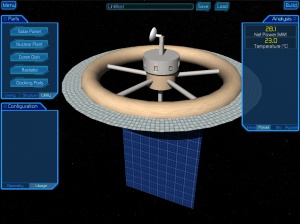 END_OF_DOCUMENT_TOKEN_TO_BE_REPLACED

Version 0.06 of High Frontier is out today!  Here’s a little video demonstrating the new rotational dynamics.

It’s been a long few weeks.

Since we first announced High Frontier, we’ve been releasing new versions about once a week.  After version 0.05 was released on July 24th, we expected version 0.06 to come out around the end of July.  All we had to do was implement rotational dynamics, so we could have realistic spinning (or tumbling) of your colonies in space. END_OF_DOCUMENT_TOKEN_TO_BE_REPLACED

In 2007, I worked with the original designers of the Kalpana One orbital settlement to revise the design for rotational stability.  To recap, you can measure how much rotational inertia an object has around any axis, but in the case of a space colony, what really matters is how the intended spin axis compares to a “sideways” axis.  The standard rule of thumb is that the inertia around the spin axis should be at least 20% greater than the inertia around any other axis.  Otherwise, your space colony could start tumbling end-over-end, and your colonists will be justifiably upset.

So, we shortened the Kalpana One length to 325 m, and gave it flat (rather than rounded) ends.  We also added a large radiator skirt around the middle, which adds considerably more to the spin axis than to the other axes (you see this sort of shape in toy tops, and for the same reason).  This got us the stability we needed, while sacrificing length as little as possible.  In the 2007 paper, we wrote:

The best case, in terms of stability, would be flat endcaps; anything else is going to move more mass away from the X and Y axes, while not moving any further away from the Z axis, and thus make stability worse (except perhaps concave endcaps, which may make sense but are not considered here).

But we’ve now spent the last couple of weeks building up High Frontier’s dynamic simulation, including calculation of rotational inertia.  So it’s time to consider those inverted endcaps.

END_OF_DOCUMENT_TOKEN_TO_BE_REPLACED

I’ve long been an advocate for thinking carefully about rotational dynamics in space colony design.  For any given object, some spin directions may be inherently unstable, as you can see in this video.  In the spacecraft industry, there is a well-known rule of thumb that the desired spin axis must have a moment of inertia at least 1.2 times that of any other axis.  However, this rule was largely unknown in the space habitat community, resulting in a lot of designs that wouldn’t work in real life.  (This is the insight that led to co-authorship of the Kalpana One paper; the original design had to be substantially revised for stability.)

Now it’s time to apply those same insights to the High Frontier game.  A grossly unstable design should wobble, and end up tumbling end-over-end, just as it would in real life.  However, when we tried to simulate this using the built-in physics engine in Unity, we ran into trouble.  No matter what we did, we couldn’t get a rotating object to tumble.  We can knock it off its original axis, sure, but as soon as we stop poking it, it just spins happily around whatever its new axis happens to be. END_OF_DOCUMENT_TOKEN_TO_BE_REPLACED