In 2007, I worked with the original designers of the Kalpana One orbital settlement to revise the design for rotational stability.  To recap, you can measure how much rotational inertia an object has around any axis, but in the case of a space colony, what really matters is how the intended spin axis compares to a “sideways” axis.  The standard rule of thumb is that the inertia around the spin axis should be at least 20% greater than the inertia around any other axis.  Otherwise, your space colony could start tumbling end-over-end, and your colonists will be justifiably upset.

So, we shortened the Kalpana One length to 325 m, and gave it flat (rather than rounded) ends.  We also added a large radiator skirt around the middle, which adds considerably more to the spin axis than to the other axes (you see this sort of shape in toy tops, and for the same reason).  This got us the stability we needed, while sacrificing length as little as possible.  In the 2007 paper, we wrote:

The best case, in terms of stability, would be flat endcaps; anything else is going to move more mass away from the X and Y axes, while not moving any further away from the Z axis, and thus make stability worse (except perhaps concave endcaps, which may make sense but are not considered here).

But we’ve now spent the last couple of weeks building up High Frontier’s dynamic simulation, including calculation of rotational inertia.  So it’s time to consider those inverted endcaps.

In High Frontier, the intended spin axis is called Y.  The new code calculates the rotational inertia around X, Y, and Z, as well as the ratio of Y to the greater of X and Z (though in practice, X and Z are usually identical).  We want this ratio to be at least 1.2.  To calculate these numbers, the game takes into account geometry, shielding, soil, and air mass.  (It’s considerably more detailed than the calculations we did for the paper!) 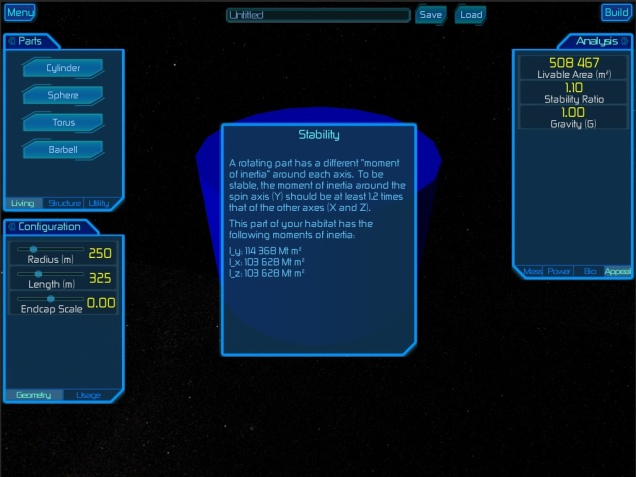 So let’s adjust: how long can the cylinder be, with flat endcaps, to get a stability ratio of at least 1.2?  It’s easy to tweak the dimensions, and let High Frontier calculate the result.  It turns out that, for a flat-capped cylinder of 250 m radius to be stable, it must be no longer than 285 m long.  That gives us a livable area of 0.45 square km.

OK then, how do endcaps affect this?  If we switch our 285-m cylinder from flat endcaps to “normal” endcaps that bulge out, with a scale of 0.5 — meaning halfway between flat and full hemispheres — then the stability ratio drops from 1.2 to 0.83.  I_y is 171,666, and I_xz is 204,727 (all in Mt m^2).  So this thing is horribly unstable around the intended spin axis — in fact once it flips over and starts spinning sideways, in that configuration the stability ratio is 1.2!  To get the stability around the intended spin axis back up to 1.2, we have to shorten our cylinder to 100 m long or less.  This looks like an aspirin tablet, and gives us a livable area of only 0.16 square km.

But what if we invert those endcaps?  On our original 285-m cylinder, setting the endcap scale to -0.5 immediately bumps the stability up to 1.56.  And this means we can lengthen the cylinder — all the way to 575 m long, in fact.  This is over twice as long as the original cylinder, and gives us 0.9 square km to live in.  The result looks a lot like a soda can (which also have inverted endcaps, demonstrating that this is a sensible shape for a pressure vessel).

So there you have it: inverted endcaps are not only worth considering, but they’re pretty much ideal.

Incidentally, this isn’t the first time work on the High Frontier game has led to some insights relevant to real-world space colonization.  The 1975 Space Settlement Design Study estimated that 4.5 tons per square meter of total shielding would suffice to reduce radiation (in free space) to 0.5 rem/year.  Last month, in the course of building the radiation simulation for the game, we found that this figure is off by about a factor of two; it actually takes roughly 10 tons of shielding, based on modern radiation simulation tools such as OLTARIS.

It tickles me pink that our work on this game is already yielding useful insights into space settlement design.  High Frontier is quite possibly the world’s most detailed space colony design tool already, and it’s only going to get better.  How much more will we discover when players all over the world start exploring the design space, and coming up with unique solutions to the problems we will face out there?